Check this out - I went into Highland yesterday and saw a big amp in Sam's repair room. I said WTF is that and Jeff W walked around the counter and looked in and said WTF is that ... lol. Manny brought it out and said a buddy of his bought it at a yard sale or flea mkt. for $20. I said it was so huge I wouldn't have paid $20 for it and Manny said oh yes you would once you plugged it in. He plugged it in and revealed thus:

And we all geeked...
Posted by Judy Ranelli at 5:03 PM No comments:

Here's a great link to a video about bats from Scientific American. It's in 3 parts for a total of approx. 12 minutes.

Saturday I went to McClendon's Cave for my first ever visit there. It is a big cave and it's only an hour or so away from B'ham. My group first went to the landowner's house to get permission to visit the cave and to get the gate key. Then we went to the cave entrance. The cave gate is made out of big pieces of angle iron. 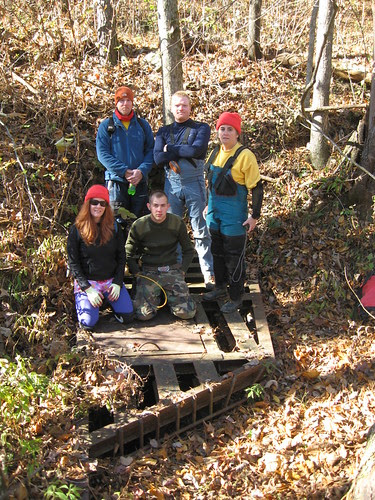 This gate is on top of a 40' pit, which we rigged and descended on rope. 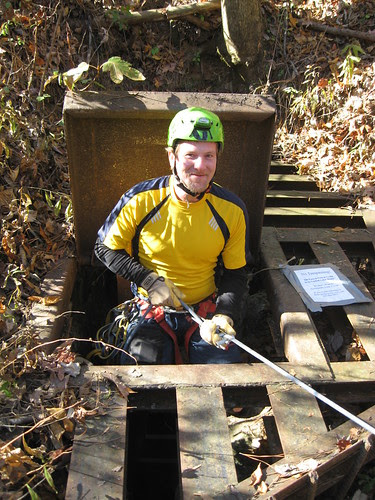 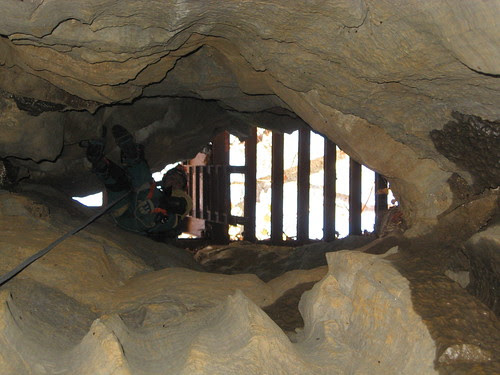 This cave has a large entrance room, then a long canyon passage back to where a couple of waterfalls are. 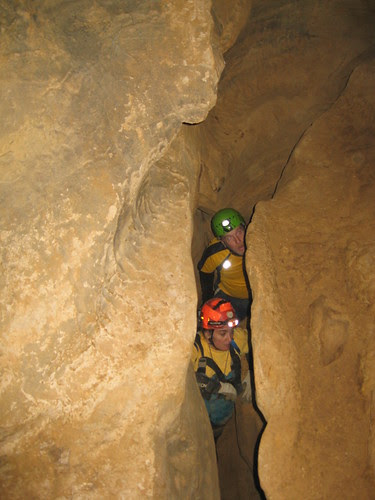 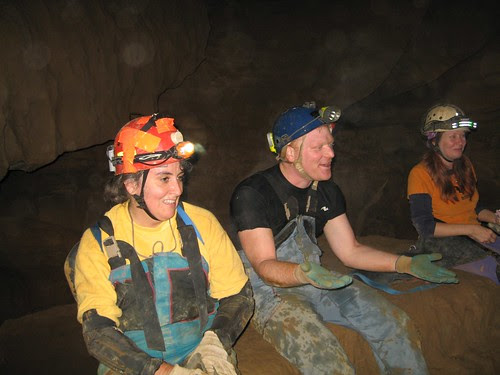 The canyon passage was dry and dusty, with a stream bed at the bottom. As we got closer to the waterfalls, the cave got wetter and muddier. In the biggest waterfall room it was about 35' tall IIRC, a scallopped dome area, and very humid. Hard to take pictures in the humidity. The wall of the waterfall dome had this strip of eroded stone in it, that looked like marble, though I suppose it was calcite. The brown rock is probably chert. 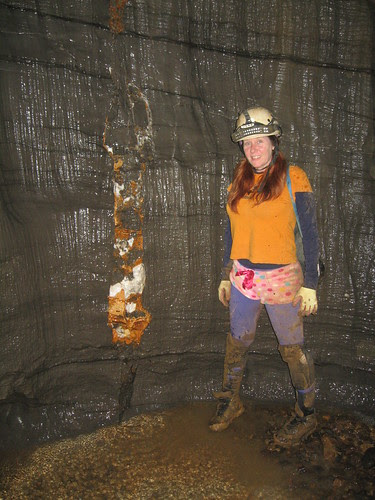 This strip of stone went all the way to the top of the dome. Note the muddy boots and funny shorts of my friend Julie in this pic. That was the first cave trip for the shorts and also the last...
There was a spot in the cave marked by a small cairn. Behind the cairn was a clay bank covered in claw marks. We have no idea what kind of creature made these marks, but they were way in the back of the cave. 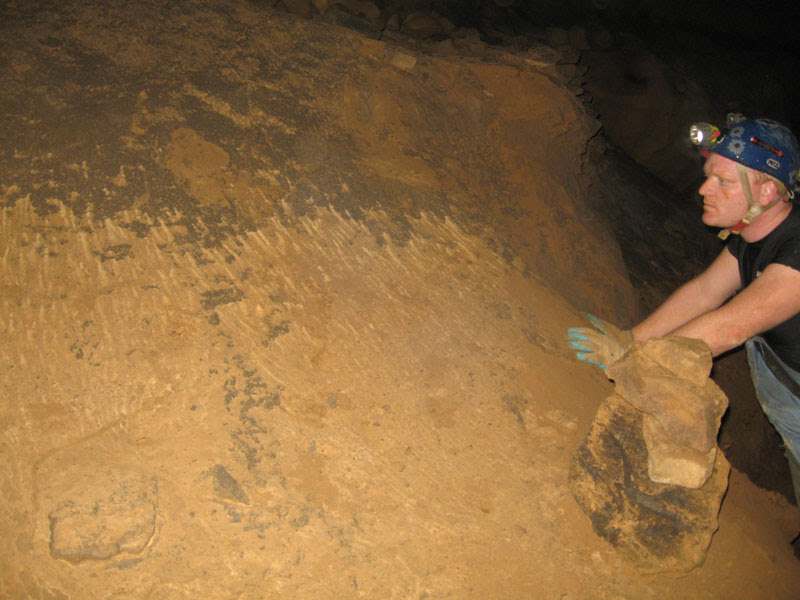 Sometimes prehistoric bear bones are found in SE caves. Or it could be a cave monster sharpening its claws...

Anyway, a fine way to spend a Saturday during a drought...
Posted by Judy Ranelli at 9:28 AM No comments:

I just finished reading the new post on http://therangelife.blogspot.com/. Incredible. Take a look!
Posted by Judy Ranelli at 8:18 AM No comments:

The holidays without John are going to be hard. We never knew if he would come to Thanksgiving or Christmas, but in the past few years he had. Now we know he will never come to visit with the family again.

I've been watching Intervention (the A&E show) on the internet, and I can't help thinking about him.

If you know someone with an addiction do not hesitate to try to get them help before it is too late.
Posted by Judy Ranelli at 9:40 AM No comments:

The Birmingham Grotto went to Anvil Cave on November 8th. The cave requires a 3 mile flatwater paddle on a flatwater creek to get to the cave entrance.

Since my camera crapped out, I don't really have any pics to share. I have a friend's gallery of pics instead. All pics are credited to Scott Fee. Here we are just before entering the cave. 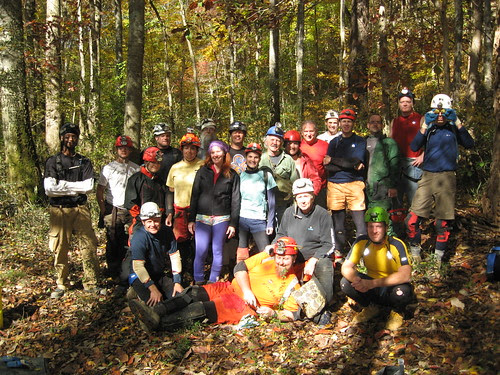 The 3 mile float to the cave entrance is flat, flat, flat. A dam backs up the water I am told, so we actually paddled 'upstream' to the cave entrance. There is NO current. It was very pretty, sometimes covered in green plants, and full of strainers. We never had to portage any. Saw one beaver or otter, it made a big splash when we came up but didn't 'slap its tail' so I am not sure, and heard one woman screaming in the woods as we floated by - bobcat was my guess but someone said a fox can also make a sound like that. It was loud!
Consequently, with no current, my XL12 canoe was the slowest boat. My friend Julie spun circles in her Perception Torrent as well. She wondered aloud why this was happening because she hadn't had a problem keeping her boat straight on other trips, then guessed that it was the lack of current. I am considering getting an inflatable flatwater kayak or canoe and selling the ww canoe.

The entrance was small, the only real 'crawl' we encountered in the cave. 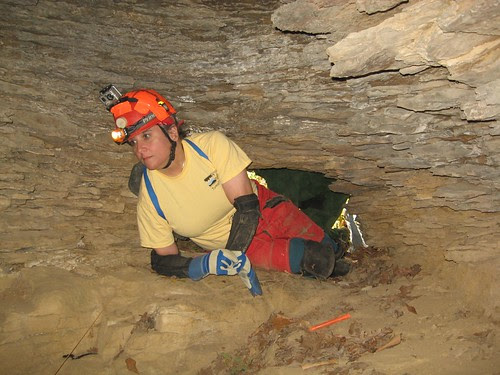 This is the only 'legal' entrance we can enter. The other 8 or 9 entrances require crossing private property, i.e. trespassing. Before the landowners closed their property to cavers' excursions, this cave was the site of the Anvil Cave Rally. Teams of cavers would go through and try to find certain survey markers in the cave, for the quickest time. Anvil was a great site for this rally because it is 13 miles mapped of a maze, on a very small plot of land, making it one of the longest caves in Alabama. You can see my helmet cam on the top of my helmet. It kept cutting off in the dark of the cave. I haven't checked the SD card to see if any video was shot. Anyway, we found a lot of spray paint graffiti near the entrance in the cave. Locals still know where the cave is and apparently they have had some parties in there. Beer cans were also aplenty. Note the 'glow stick' on the ground near me, probably left by a local. String was throughout the passages near the entrance as well. Scott didn't take any pictures of the graffiti - I'm not surprised, much of it was expletives.
Here is a picture of the cave map: 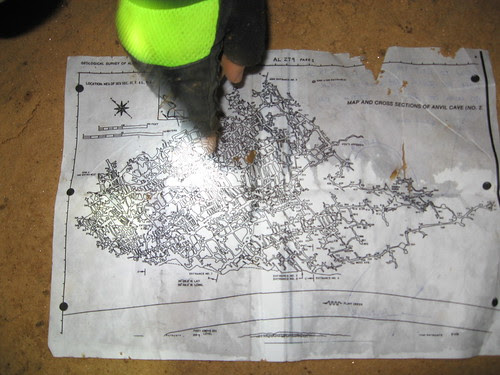 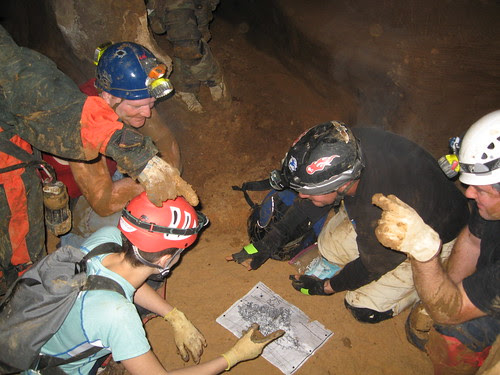 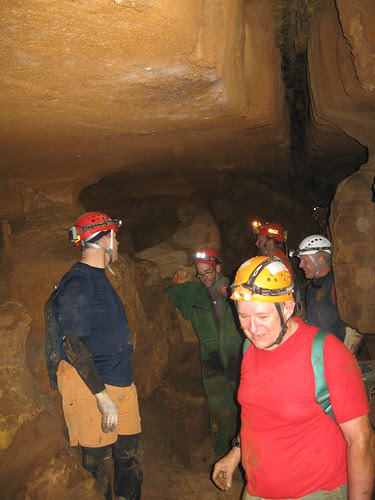 Of course we ended up split into groups and my group found a part of the cave full of pretty formations. Hopefully some pics of that will be posted. We used the map and a compass to find our way out. This wasn't easy even with map, compass and a trip leader who had been in the cave during this summer. It really is easy to get turned around and lost!
At some point I mentioned that we should have set a call-out time. And my group realized that none of us wore watches. And I said that it gets dark early and padding through those strainers in the dark would suck. We all started (tried) to head back. Which was comical because 'heading back' was no easy task. The map owner said we were in a part of the cave far from where I thought we could have traveled in the time we were in there. So the trip leader and I looked at the map and decided that we were actually in a totally different area than the map owner thought we were. (sorry J but that really happened. Now that's not saying Dave and I were right... but it did look that way to me). That's how Anvil Cave is! I told everyone I had fire starter, warm clothes, a 6 pack of tall boys, some Doritos, and a Big Snickers bar to share, all stashed in my boat, if we spent the night outside. You might not believe me but the whole time the trip was fun. Being in the maze like that was like a big puzzle. We kept trying to head South-West.
I am editing this post because it sounded like we didn't need the map reader and compass guy the first 'edition'. On the contrary, I was worried, seriously worried, that we would lose those two and then really be lost. I had a chance to bring a copy of the map and didn't, and a chance to bring a compass and didn't. Which was f'tarded, reminded me of my not bringing water, food, a GPS, phone or warm clothes that time when we almost overnighted on Clear Creek at flood.
At a long hall called 'Main Street', like a miracle, the rest of the group showed up at the same time. 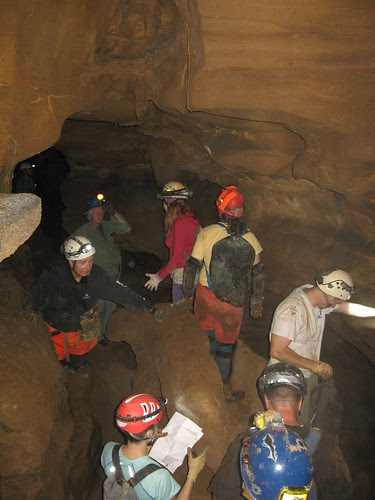 We did a head count and everyone was together! We headed out of the cave and had several compasses and cave maps to add to the confusion. The map readers did a good job, and when we were out, it was only 2:30 pm. We really weren't in there as long as we thought!
Back to the boats, and a slow (for me) paddle to the cars. Then radio as I drove to a restaurant near home, I heard most of the second half of Bama/LSU on the radio, and went into the mexican restaurant with the group just as 2 minutes were left in regulation. The game was on big TV's in the restaurant. The others found my enthusiasm amusing. Bama won in OT, I had a great dinner, and went home exhausted and happy.
Posted by Judy Ranelli at 9:02 AM 4 comments: