I planted pink/red and white vincas everywhere around my house, and still had some left, so I brought them to work and gave them to Jerry.
I know that eventually I will break down and hire a gardener. I also know it will be expensive. I don't mind doing the lawn mowing but the weeding and flower maintenance takes time I don't want to give (though I love all of the flowers in my yard; I have several kinds of roses, azaleas of many hues, lantana, daylilies,
geraniums, gardenias, and a peony) because I am paddling pretty much every weekend.
I've made a decision, not quite consciously I think but nevertheless factual: I am paddling instead of caving this year. I expected, when I started paddling, to find myself less inclined to be on the river as the years go by, but it seems that I crave it more than ever. The tiniest events on class II can fill me with it - like a combat roll I had in the demo Project 52 this Sunday. There is a spot on the Nanty that has a river left rock in a bend/wave train. You can go left of the rock in a small chute between another rock/river bank, or right and skip down the little wave
train. I hesitated in my decision long enough to go into the rock instead and then I folded into a river right crease against the rock. I tried to roll up, carped, knocked back over and thought in my head, "Come on, you can do this" and rolled up just in time to be facing another rock, which I hugged and worked my way around with my left hand. I loved it.
Yes this is a feat that any first-year boater could experience, yet any time I get a handle on my old fears of injury it's exhilarating.
Like so much in boating, this scenario can teach me about something in real life.
-----------
I also spent the weekend with the Geezers, which are a group of boaters I met through Boatertalk. We had folks from Ohio, N.C., S.C., Georgia, Tennessee, and Alabama. 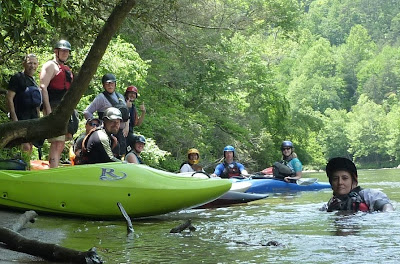 We kind of agreed that to be a Geezer you had to have one of the three following attributes:
1. be old.
2. have at least some gray hair.
3. have a boating related serious injury in your past or present.
Some of us had all three of those attributes; some were much younger (30's) than the oldest (62) and yet they had one or two of the other attributes. Many of us, me included, are in the kayaking shoulder dislocation/surgery club. I think only Jocelyn has none of the above qualities, and yet she is a Geezer too. A finer group of friends I have never met. We all share the same thing- a love of whitewater kayaking that has been so irrational sometimes, considering the punishment it can mete out - but so unquestionably right at the same time. I cannot describe it to you if you the reader have not had the experience.
More pics from Spring Geezerfest 2010
Other things- I bought a ukulele, a Kala Ka-C concert sized, from a great vendor in Atlanta, ukerepublic.com. It was $122 with a setup, better strings added, an extra set of strings, a padded gig bag and shipping. I've had it at work during renders and I want to make sure I do not drive my co-workers crazy with it. Yet I am already driving myself crazy with it. I didn't expect to get obsessed with the little thing, but it is awesome. I've played it so much my hands are sore. So far these are the songs I've learned, either by looking them up online or just figuring them out:
1 If I Fell by the Beatles - one of my favorite John songs
2 Michelle by the Beatles - one of my favorite Paul songs
3 Here Comes the Sun by the Beatles - one of my favorite George songs
I guess I should learn a Ringo song . Can Yellow Submarine count? I guess I could learn Photograph.
4 Someone to Watch Over Me - Gershwin
5 Let's Call The Whole Thing Off - Gershwin
6 They Can't Take That Away From Me - Gershwin
7 Our Love Is Here to Stay - Gershwin
Are you seeing a pattern here? Beatles and Gershwin. It really doesn't get better than that.
See You On The River
J
p.s. when I'm 80 like my mom, I want to be like Aunt Margie:
http://www.youtube.com/watch?v=1uWpw1i0UFw&playnext_from=TL&videos=ngarXWGuXFI
Posted by Judy Ranelli at 8:09 PM No comments:

I spent the afternoon with my mom for Mother's Day, and she told me about her grandparents from England.

Tom Williamson came to Alabama from Newcastle, England to work in the mines. He went back to England and brought over his wife Mary Elizabeth. Once they were here they had 9 children:

Jim Williamson married a woman named Margarite and had 3 kids: Jim, Dolores, and Mary Lou. He worked at the steel mill. Jim Jr. died young from a brain tumor, Dolores moved out of town, and Mary Lou worked for Don Drennen in Ensley.

TJ married Ellen and was drafted in the Army. They had one son, Dixon. TJ was an electrician in the Army and while working on a telephone pole overseas he fell and was in a coma for several months. After he came out of the coma he continued to have seizures and couldn't work. Ellen divorced him, saying that he was not the same man she married after his brain injury, and TJ had a seizure that ended his life. Ellen never remarried and she stayed close to the Williamsons; Aunt Mag and Aunt Shane helped raise their son.

Dixon made the Navy his career. He lived in California whilst in the service and, after retiring from the Navy he moved to Tn. and continued to work for the Navy (I am guessing as a contractor). A ship he served on in the war was blown up in the Pacific and Dixon spent some time in the water waiting for rescue, an experience I'm sure was memorable. He was married 2 or 3 times, had one daughter named Margaret, and had two heart attacks, open heart surgery on the first and died from the second.

Jess Ann (Shane) married Jimmy McCutcheon, (spelling a guess by me) who was a miner, and they had 4 boys and 1 girl: J.D., J.O., Tommy, Morgan, and Betty (Mary Elizabeth). As far as mom knows Tommy is still alive.

Lenore (Nore) married (?) and had 1 son, Billy LeCroy, who died of diabetes.

Evelyn married (?) and had one son, Jerry Roberts.

Winifred (Pee Wee) married (?) and had 2 girls and 1 boy: Nancy June, Diane, and Philip Doss. As far as mom knows Pee Wee is still alive (if so she must be 100 years old) and lives in Jacksonville Ms. with Diane.

There are a lot of cousins here that I have never met. I failed to get the names of the husbands of Mag, Nore, Evelyn and Pee Wee. And if Pee Wee is still alive that is remarkable.

If you are family and have some more info on the Williamsons please let me know.

Posted by Judy Ranelli at 8:00 AM No comments:

This is a link to the best online roll instruction video I've ever seen.
http://www.h2odreams.com/H2o_Dreams/Tips_and_Tricks/Entries/2010/2/14_Roll_Troubleshooting_-_The_Hip_Snap.html
Posted by Judy Ranelli at 9:32 AM No comments: