Good stuff going on. Tomorrow is my mom's 80th birthday! We are celebrating with a fancy party at The Club for her and her friends.
Such a wonderful thing to have my family. I miss my father, and I miss my nephew John. I am however grateful to have my sister Kathy with us victorious after her battle with cancer, and all of my other siblings, especially my sister Marilyn. My three brothers, Frank, Sam, and Rick, will be playing music at my mom's party and I expect to be up for a song or two myself. I dunno how goofy I'll look playing bass or guitar in a nice dress but it'll have to work. ;-)
And - July 4th - after BBQ at my brother's house - it is the start of Week of Rivers, a Carolina Canoe Club event that takes place at Smoky Mtn. Meadows campground near the Nantahala river every year. Last year I paddled 5 different rivers during WOR, including 2 that were my personal first descents- the Pigeon and the French Broad. We have creekside sites and set up a little 'tarp city' because it always rains some during WOR. Being paddlers, we don't mind getting wet on the river, but it's a little tough trying to cook and eat our dinner in the rain...
Still working on my roll, yes I have been hitting my combat rolls when I follow Craig's advice, but the old bad form creeps up once in awhile. I did a stern squirt on the Hiwassee at Thread the Needle and carped coming up. I also slid around in the boat so after I crashed back down I put my hands on the cockpit rim to readjust my position and felt a 'bump!' from Ryland who saw my hands and thought I was eskimo rescuing. So I thought, what the heck, why not? and eskimo rescued. I can't believe, after all the foam and padding and discomfort I've added to the EZ, that I can still slide around in the outfitting. We had a good time at that eddyline, at the 360 hole on Three Bears, and at the ender spot at Three Chutes.
This weekend, since I have to stay local, I am going to take the triple X to the lake and see if I can get a bit further on initiating my bow. Craig gave me an aha! moment when he showed me that my posture made a big difference when driving down the bow. I've been trying to get a bow stall, or even close to a bow stall, in flatwater for years. Maybe it's futile. But at the least working on flatwater bow initiations has got to make a big difference in my eddyline wheel attempts.
So far, a great summer - my plum tree went off btw and I am now sick of plums ;-) and if I'm lucky, I'll get to paddle again with Spicy Pablo.
Posted by Judy Ranelli at 8:18 AM No comments:

This is outstanding. I want an octocopter now!

The River from FPV-Leif on Vimeo.

I made a pledge last year to work on my rolling issues. My reward for 20 combat rolls would be a new Werner bent shaft, small shaft fiberglass Player with purple blades (only sold at NOC btw).
Yesterday after a good rolling class with Endless River Adventures the day before, I went into NOC and bought my new paddle. Here is a picture: 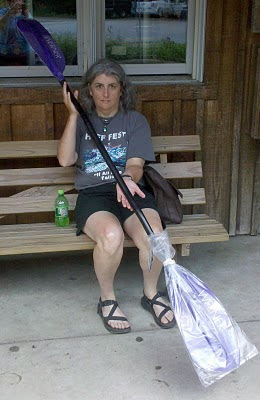 I followed up the Saturday lesson by buying the purple paddle on Sunday, then meeting friends on the Nanty, rewarded with a good combat roll mid-rapid on Sunday, and many stern squirts and surfs.
What did we work on in the private instruction? Craig diagnosed my roll issues very quickly. He had me adjust my setup so it was a good bit further back towards the stern. He had me initiate my head dink a millisecond *before* snapping my hip. And he had me concentrate on arching my back during the hipsnap and continuing in the finish position. As I ponder these things this morning, I think arching the back is far more important than I had realized.
Craig also started me back on a regimen of doing left hand rolls, which I was doubtful about at first, but, when I did as he instructed - arched my back and initiated my head dink just before my hip snap, I popped right up.
Next Craig had me work on an ERA specialty: directional rolling. This means that, when catching an edge and tipping over, go ahead and set up and roll on the side of the caught edge, using the current momentum to help roll back up. To practice this, he had me do the stern squirt motions on flatwater, and when tipping to set up on the side that I had caught my edge on. When trying for a lefty roll this was very counter-intuitive for me. I have a very ingrained reaction when flipping to set up for a righty roll. This is a great exercise because it forced me to be aware of which edge was catching and start changing my reaction to one that is relative to the edges not to my habit of one sided rolling. When mastered this will result in a faster roll matching the speed of the current. I can practice this on the lake at home and really get my responses tuned up for rolling on the side that gives me the most advantage, rather than favoring a side.
Another thing we talked about was bracing while river running. As in, don't do it. Jeff West also instructs this. Jeff says that rather than brace, take a good stroke. Craig says that, if you're tipping over go ahead and do a directional roll and go on your way. I think both Jeff and Craig are right about this and I have spent far too much time laying on my paddle brace goofing off, when it's really reinforcing a bad habit.
Next we worked on stern draws to ferry across current. Boy this is *really* counter-intuitive to me, and something I really want to work on more. Use the stern draw to set your ferry angle, after letting the current catch your bow coming out of the eddy, then maintain the draw to propel you across the current, rather than paddling. One challenge with this is keeping the blade parallel to the stern - any feathering forward or backward alters your ferry angle.
I had had some instruction in stern draws while surfing from Juliet but had not tried this for ferries, and it was really challenging. When Craig would do this it was such a graceful move, energy conserving, and precise.
Finally we did work on stern squirts and I realized that I never do righty stern squirts, when I didn't realize before that I had a preference. I suspect that this goes back to only doing righty rolls. That is not a preference I intend to have much longer. I got a decent lefty stern squirt or two, but never pulled off a righty. (my definition of righty and lefty stern squirt: righty = initiating right stern edge from an eddy on river right to current on my right; vice versa for lefty. If I have this all backwards I would not be surprised.) * I had to edit this because I did have it backwards. I still may! ;-)
We also did a bit on bow initiation and I had an aha moment when Craig showed me that for the forward sweep and reverse sweep strokes you have to maintain forward posture, rather than lean back. My bow instantly went deeper than I'd ever managed before and I am excited about exploring this further at the lake. Another bonus was that it didn't tweak my shoulder at all.
And this blog today is a good testament to something I have found to be true: Continuing kayak instruction, with great instructors like Jeff West, and Juliet and Craig from ERA, is always a good decision. Especially if you are like me - living hours away from summer water, only able to paddle on weekends, and middle-aged. ;-) It's a treat I give myself; it accelerates my learning and helps me correct mistakes; and it makes the sport much more fun.
If you would like to boat with me and work on stern draw ferries, back ferries, directional rolls, and simple playboating (stern squirts, 360's, eddyline and hole cartwheels, and so forth), let me know. It's hot and muggy outside and perfect weather for getting on the river or in the lake for flatwater practice. See You On The River!
Posted by Judy Ranelli at 7:54 AM No comments: