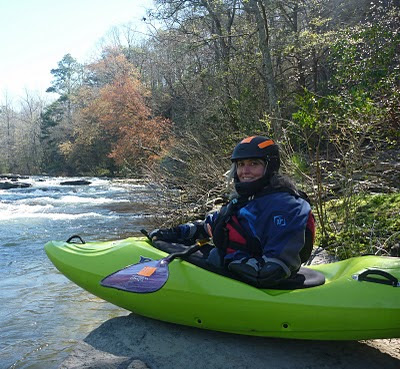 Jan 2nd. - BCC Feast on the Beach. At the Mulberry takeout/BCC property. Level 3.5 ft. In the Riot Magnum. 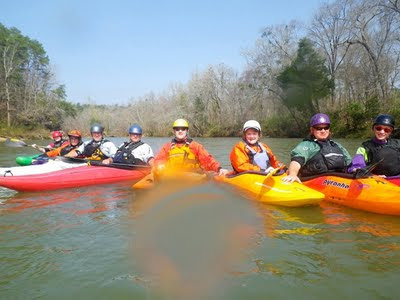 Playspot near Glen Clark was in but shallow, Training Wheels was in,

Jan 15. Ridgewalking at Guntersville State Park in the snow. With Dave and Valerie. Pics here.

Jan 22. Locust Fork. With Vander, Mark, Gray and Chuck N. Level very low. In the WS EZ. Got surfed in hole at base of Powell Falls. 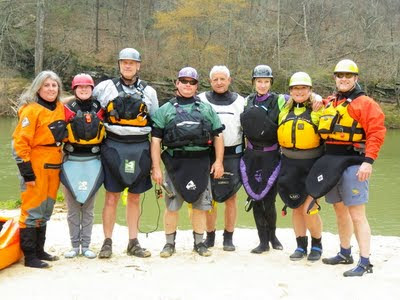 Feb 4. Ridgewalking. Somewhere in the B'ham area, looking for a rumored local cave. No luck, we found something but I am pretty sure it is an old mine shaft.

Feb 5. Went to Locust Race. It 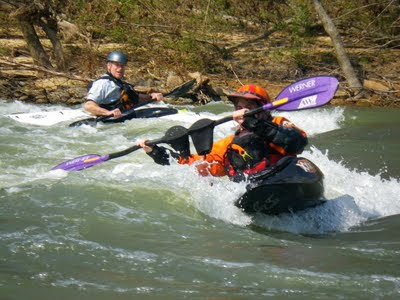 was cold! Didn't paddle. Slalom postponed till sunday; downriver started at 3. Hung out with Mark and Vander, then they left and I spent some time with Ryland and Jenni after they got off the downriver course for a warmup.

Then went by the Locust Race, saw Mary M., Jason and Moe. Pictures from Mulberry and from the race are here.

March 12 Ain't Louie Fest. Elkmont section of the Little, 3.6 ft. In the Magnum. With Wendy and Roger. Went to Sinks to watch boaters go off of it. Video of Sinks HERE.

March 26 Ocoee. In the Magnum. With Ryland and Ben F. Normal release, but chilly drizzly weather. I only brought drytop with thin skin short sleeve underneath and neoprene pants, so I bombed down to goforth and took out there. Ry picked up a fluid solo s for Jenni.

March 27 Ry, Paul E, Lee, and I went to Shoal creek. On the way the gauge spiked to flood. At the take-out it looked pretty good, but there was a dead bobcat with a whiskey bottle between its paws laying on the ground. Not a good omen. We decided not to run Shoal. We went down 79 towards the Locust instead, checked the level at Calvert Prong, too low. Ran the Locust at 3.6 in the Magnum. Great great day. 1 roll at the Falls.

April 2 Tigers For Tomorrow. No photos allowed. A neat place, but also sad because these big cats and other critters had dire need of homes, and their situation would not be as it is if legislation outlawing owning big cats as pets were adopted. You can be arrested for owning a pet whitetail deer or mockingbird in Alabama - but a tiger or lion? Legal!

April 23 Locust. In the WS EZ. Level 4.2 ft. Air temp 80's. With Ry, Rundell, Paul and Lee. Lee broke his paddle in Double Trouble and we fixed it with a stick inside, and some duct tape that came off of my paddle outside. The stick broke soon after and Lee paddled Whoop-Te-Do with one half paddle in each hand. He stashed the shorter half and paddled Bullard Shoals to 160 with the long half kind of like a C1 paddle. His run of Bullard Shoals - upright - gave me some of the best belly laughs I've had in a while. He attempted 2 runs of Powell Falls and swam both times, but he almost made it both times too.

May 10. My mother Sara passed away. I am putting it here to remind me of what happened around this time.

May 15 Visit to Joan's House. The day after my mother's funeral. In the WS EZ. We played wiffle ball and frisbee with her two nephews and their friend - one 12 year old and two 10 year old boys - then went paddling in the creek behind her house, with periodical cicadas everywhere, white egret, two grey herons and an osprey. Then Joan gave me my first ever tennis lesson. It was very cathartic to hit the tennis balls that came out of the throwing machine. 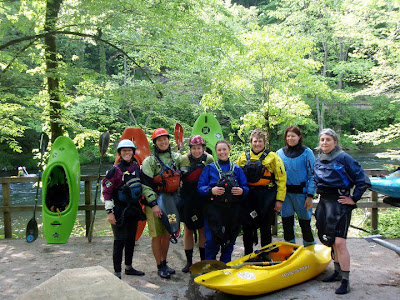 June 4 - Coosa. Spectated at the Coosa Whitewater Festival. In the EZ. Level 8000. Temp upper 90's but the water was cool and there was a breeze.

June 12 Hiwassee. In the WS EZ. With K1Chik. Paddled most of the day with Team V. 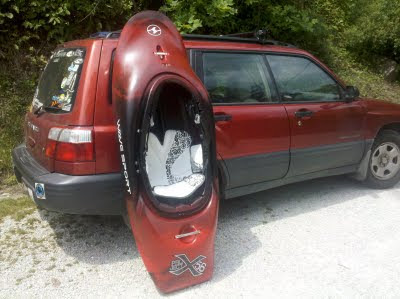 I love my new boat!!!! With Ryland, Jenni, goodbones and tweetybird, and a new friend named Craig. Craig swam Patton's and busted his chin. He had to get 6 stitches in it later on after we got off river and had dinner at River's End.

June 19 Ocoee. In the Project X 56. With Ry and Jenni, Kenny, Julie, and Mikeyboats.

June 26 Ocoee. In the Project X 56. With Amanda H, Mary Mills. Met up with Ryland and Rundell at Go Forth.

July 8 - Nantahala with Brian on SUP and Susan to Ferebee, and Joan, Julie on SOT, Joy, to takeout.

June 23-31 Middle Fork of the Salmon. In Bonnie's EZ. With Gordo and Bonnie, Chris K and Chris B, Don K, OC1-Kanubi, many others. Best trip of my life. Pics HERE. Great trip report from Kanubi HERE. Some advice I gave a friend who is leaving for the Middle Fork this Thursday Aug. 4 - "I got blisters/sores on the tops of my feet from wearing wet, sandy Chacos; the straps and sand cut into the skin. So a better plan is to put on dry socks and camp shoes when you are in camp. I ended up putting bandaids and gorilla tape over the bandaids on my feet to try to stop the sores from getting worse.
I don't know what levels you will have but at 2.8ish I'd rate Powerhouse a sweet long class III boogie, Velvet Falls a III-, (easy line on the left by the rock). Pistol creek a IV, Tappan Falls and Tappan three a IV-, Weber a IV-, Rubber a IV, Haystack a III+, Cramer Creek a III+ (just go for the tongue down the middle, hootenanny, plenty of deep water to roll below). Lower Gauley feel to the wave trains. Lots of big holes to dodge. You might have some hardboaters with you that know the lines. That would really help! We boat scouted most of it except Pistol and Tappan Three. Wish I had scouted Rubber. Don't go down the right side at Weber. Do go down the right side at Tappan Falls. Hope this helps. BTW there is a book with all the rapids and camps etc. but really not helpful to hardboats for the lines. I didn't read it until after I got off the river and bought a copy in Salmon."


Aug. 7 Mtn. Biking and Rolling Practice at Joan's. Julie, Joan and I road mtn. bikes on her family farm and then had rolling practice at their pool. I conked my head while playing in the pool with some of the nephews.
Aug 13-14 BCC Summer Slam. Sat: Nantahala, in the WS Project X56, with Debbie, Chris, Haywood and Scott. Sun: Upper and Middle Ocoee with Andy, Lynn, and Jim.
Aug 21 - Hiwassee. In the WS Project X56, with Jenni, Ryland, and Rundell. My paddle and two helmets were in my car in the shop, so I used my old paddle and black Pro-tec helmet. It was fun putting the grass in my helmet holes like the old days.
Aug 27 - Middle Ocoee. In the WS ProjectX56, from the top. With Andy, Lynn, and Ben.
Aug 28 - Upper Ocoee. In the Riot Magnum. With Andy, Lynn, David, and Mark C. who borrowed my WS Project X56. One crazy line at the bottom of the Olympic section and one roll in Roach Motel made my adrenaline fix, so I went home rather than paddle the middle.
Sept 2 - MCBS Open Jam, Ranelli's Deli Soul Pit. I played bass. Quick visit since I had to get up at 6 and drive to the Ocoee... things I do for fun... ;^) 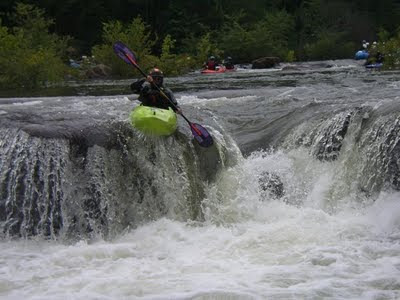 Sept 10 Mulberry. In the Project X 56. With Joan. Missed Team V, they put-on earlier. Ran into ol' high school buddy Suzanne, she had followed me off of the interstate to the put-in when she spotted my car. She was kind enough to be our shuttle bunny. Great time, level 1 foot, 702 cfs.
Sept 11 Bike Riding. With Joan at their farm. Another great time! The weather is beautiful right now.
Sept 17 Warrior Dash. In Manchester, Tn. With Katie and Gary. Pics here. Video here and here.
Sept 18 Ocoee. Middle Ocoee in the Project X 56. With Mikeyboats.

Sept 25 Choccolocco Creek. With Joan and Linda. My knee is hurting from sprints so I sat in front of a 2 seater Sit-On-Top with Linda driving. Then went by to visit Blue Eye Springs near Lincoln. Pics here. 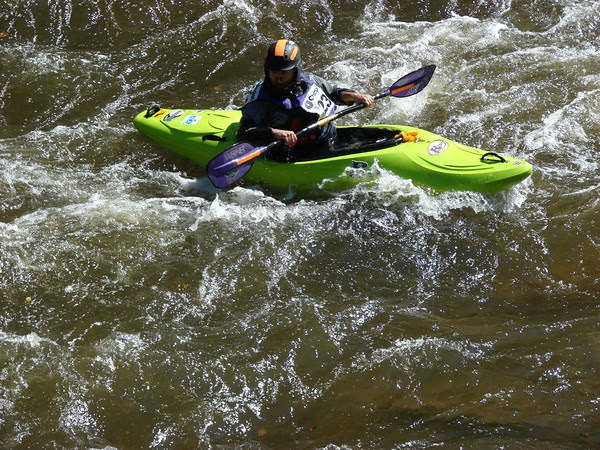 Oct 16 Bham Grotto Vertical Practice. At Palisades Park. Pics HERE.
Oct 22 Coosa River. 4000 CFS. High around 7o degrees. In drytop and shorts, didn't get too warm or too cold. At this level the Ender spot at the ledges is in. We did not check on Baby Gap but figured it wasn't in. In the WS Project X 56. With Glen, Joan, Julie, Heyward, Debbie, Caren, and a couple more folks whose names I can't recall. Pics HERE.
Oct 23 Ridgewalking in The Big Coon. With Dave H, Reed and Forrest. Returning to a lead Dave and Reed had started to dig open, and a lead Forrest found and they had dug open. We found a name and number in the low 20's scratched on the wall of the second lead. We are not the only ridgewalkers... also found some interesting nerd holes, indication a good elevation to check next visit. Pics HERE.
Oct 29 Bikram Yoga.
Oct 30 Coosa. 8000 cfs. High around 68 degrees. In the Project X 56. With a big group. 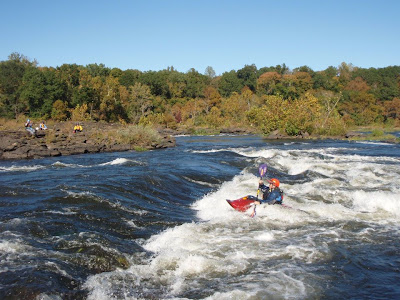 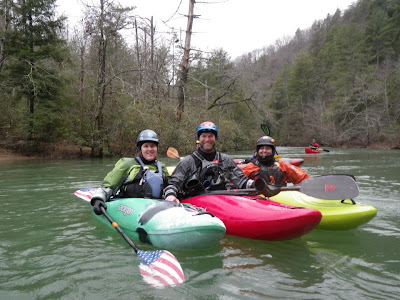 Even though it's Halloween season, not *those* Zombies. The Zombies' Odessey and Oracle album is one of my new favorites. And it was released when I was 2 years old.

This is one of my favorite songs on it: Hung Up On A Dream. It strikes me that the music from bands I like that is released today, hasn't really changed genres from the 60's onward. It also strikes me that I simply love Mellotrons.
I have been told that the artist that made the cover misspelled "Odyssey" and the band was too nice to have him correct it.
Posted by Judy Ranelli at 1:38 PM No comments: